I watched the TV report young people against climate change this weekend in Finland. Reporters interviewed some of them, and it revealed that their knowledge was limited. They shifted responsibility to decision-makers. On the other hand, some journalists seemed amused by the energy of the youngsters. Then there was this Swedish environmental activist, Greta Thunberg, who gave a fiery speech at the United Nations Climate Change Conference on 23 September 2019. He openly accused adult people partly with reason, but the accusation is no more than a charge, whereby the goal itself is buried under the finger of the index.

The world is in a position where everyone has to give up comfort and come up with constructive suggestions to bring about change. Moreover, these changes must begin immediately. For example, when detecting the harmfulness of private motoring, governments could adjust the dates for prohibiting private motoring. These and other similar decisions would get people used to what purer living means instead of blaming.  In reality, very few people have to use a private car in Finland for business trips.

I wondered how goods are thrown into the trash when there is only one small broken particle. To reduce this, the European Union should develop standards defining standards for serial production parts. This way, all computer cases would be matched, all batteries would work on all similar devices, operating systems should work on all processors, so this incompatibility would not leave the devices in boxes or landfill. The ballpoint pen cartridges would fit into all pen cases, and the top and bottom of the pens would be standardized for twisted standards. These recyclables would create enormous jobs, and in the future would no longer necessarily sell whole equipment but only parts that a new profession would install. The consumer would not buy the device, but for a particular kind of overall service. As this increase in recycling would reduce manufacturers’ income, they should be allowed to implement this change.

The governments should regulate Holiday tourism by setting a kilometer or emission limit for an individual. Buying these kilometers from other people must also be made impossible. Otherwise the poor would sell them to the better-paid ones. The need for such restrictions would be eliminated if the vehicles became pollution-free. The device manufacturers’ promises of less polluting cars should not be taken as actions to slow down climate change. Global activity is almost criminal because it slows down and often also eliminates local production of services and products and recycling of parts.

While these suggestions may not be the best ones, they are a step in the right direction. Implementing change is the most challenging step in combating climate change. An action that everyone hates and accuses each other of taking more significant steps to combat practical steps. Sure, this is not a conscious activity, but in the face of change, emotions are on the surface so that excesses will come. Besides, an attack is the best defense. Now, however, the world is at the point that it cannot attack but merely defend the right of future generations to exist.

This writing started with a poem that marvels at human beings. It goes like this

I don’t know why human beings are so strange.
The world is in its death bed,
But human beings only invent excuses
Why changes are impossible to realize.
Juveniles accuse adults
And adults say youths are dreamers.
Both sides think that we should not save
The world as those people hurt earth more
Than us.
© Yelling Rosa
2/10 -10

PS Maybe one of the readers is wondering if that guy can afford to suggest more difficult things to people’s lives. He/she is right in the sense that we all are destroying our nest here. Don’t worry, yes, I love amenities and suffer the loss, but now we are in a situation where attitudes have to change. 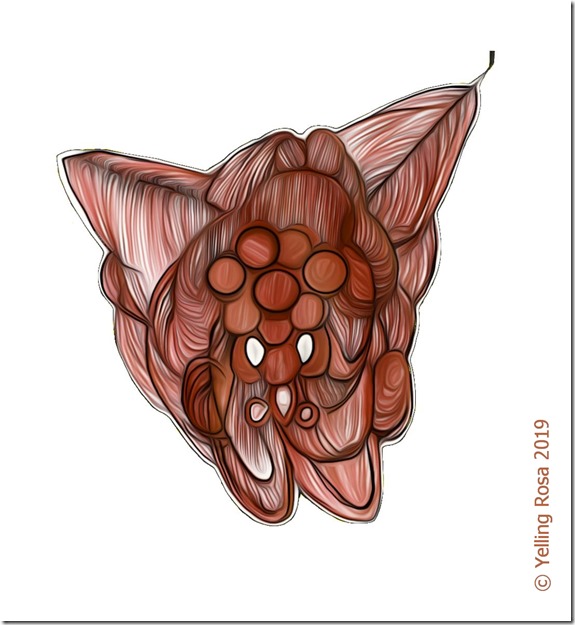 Do you know what this is?

It is a consumption virus that lives almost in every person’s veins in the world. It hates everything that stops consumption and whispers to master animal’s ear why people can’t hold down consumption. One of its most persuasive arguments is that you can’t go backward. In its view, increasing human resources is an absolute move into the Dark Ages. Even for the Stone Age, says the consumption virus.

Despite the efforts of responsible people, the impoverishment of the earth and the rape of the climate continue. The viruses tell to their disease carriers to call those environment activists as the modern-day destroyers. Every time the disease carrier manages to win the debate, the virus lays more eggs to master’s cells. However, I wonder whose greed and thoughtlessness these creatures drink when people have disappeared from the planet. Perhaps then they are happy and sit on the top of the hill, saying, “We are the last to ride to the sunset.”

The picture is an enlargement of the consumption virus.

PS Usually, viruses don’t lay eggs, but these are weird.

I am retired. In my spare time I read, write, play the guitar and hike. I have published three verse books in Finnish and recorded my songs. You can listen to them on YouTube. I have translated some of my poems on Yelling Rosa's Weblog. I also like to watch movies. Olen kiinnostunut lukemisesta, kirjoittamisesta, kitaransoitosta ja luonnossa vaeltamisesta. Olen julkaissut kolme runokirjaa ja laulujani on äänitteillä. Voit lukea runojani Yelling Rosan kotisivuilta ja kuunnella laulujani YouTubessa. Olen elokuvafriikki.
View all posts by Yelling Rosa →
This entry was posted in Democracy, English, General, Holidays, Languages, Nature, Poetry, Society, Swedish, Technology, Visual Arts. Bookmark the permalink.